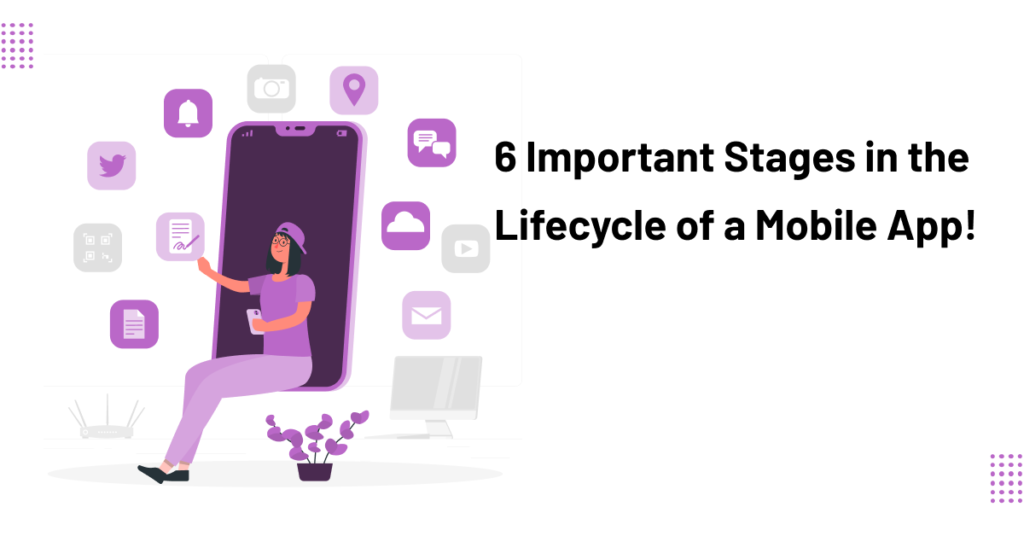 Making an app is challenging

There is no need to sugarcoat the truth. The process of creating a mobile app may be protracted, tedious, and challenging. Thankfully, it’s not necessary. Let’s see the mobile development lifecycle, what to anticipate, and a few tools that could be useful to you.

The Lifecycle of Mobile Development

The typical mobile development lifecycle is shown below:

Understanding why you are designing a mobile app is the first step in the process.

Start by asking the following queries:

Although by no means comprehensive, this list of inquiries might help direct the development of your app.

Please don’t create the app only for creating one; it would be far better to forgo its creation than to make something of poor quality that your target market won’t find appealing.

Your company’s marketing department should also create a campaign for the new app before it is released to increase exposure and generate excitement before and during the launch.

Building campaigns should begin at the planning stage, but until the product’s fundamental functionalities are established, they must be adaptable to changes in app capacity.

Stage 2: Design After the App Has Been Planned, Design May Begin.

You and your company should concentrate on usability and user interfaces throughout the design process (UI).

The functioning component of an app focuses on how it functions and what users can do with it, while the user interface (UI) covers what users see and how they interact with the app. Wireframing is a typical method for creating the user experience.  Wireframing said, is a first draught of what consumers will view. It’s a hasty method of putting the app together in a manner that makes sense for the user.

The benefit of employing wireframing tools is that they are highly adaptable, primarily when used during the design phase.

Consider wireframing as a wall covered with sticky notes where you may add, rearrange, and delete ideas to suit the intended audience’s needs. Although the consulting-focused development side of the design is more common, one or more than two members of the dev team should always be participating in the design phase. They must advise what your company should reasonably anticipate from the app’s functionalities.

The development step is divided into two phases: prototyping, which is designed to be rapid, and construction, which is the actual creation of the finished product.

App prototyping may be a crucial step in the development process, even if it may seem like overkill or that it would slow down the process. Before beginning the natural construction process, prototypes are brief builds—in this example, of the mobile application—that are used to test design concepts.

The basic concept is transformed into a working prototype using prototypes. The drawback of wireframing and early UI designs is that you can’t visualize how the draught app will operate in actual use. Before fully entering the construction stage, the app developer or development team might test their early ideas by creating a prototype to determine what could be lacking or troublesome.

Such foresight may help avoid delays and multiple mid-build adjustments, which significantly slow down the build process and hinder the rapid delivery of applications.

The construction process may begin now that the app prototype has been worked out of its first issues. Your developer(s) should spend the most effort on the actual app construction. The preliminary ideas, designs, and prototyping-related lessons come together at this stage to serve as a manual for developing the final product. Build tools may be used to target the amount of expertise that your developers possess specifically.

Mobile development platforms provide seasoned developers with the broadest range of tools and alternatives to work with for businesses, possibly trading some practicality for thoroughness and better app functionality.

The build stage should have the highest level of flexibility across the mobile development lifecycle.

Investing a lot of time in the app construction might reveal problems with the app’s anticipated functionality and provide fresh ideas that might not have surfaced during planning and prototyping.

Keep in mind that you don’t want to become caught in a cycle of concept development. The image could be best to keep as a feature update after launch if the concept is too broad or just not totally consistent with the present version.

Your developers want to make sure that the app is fully functional at this point. Every single activity in the mobile app is tested, from the most popular to the least, to ensure that nothing “breaks.” Software solutions, specialized QA analysts, or crowdsourced testing solutions may all do this testing.

A break could be:

A break might potentially manifest as a number of other possible failures that give the impression that a programme is unfinished or underdeveloped.

Before the app launch, every business should strive to reduce the number of faults or breakdowns as feasible. Without sufficient testing before release, an app runs the danger of failing immediately. Due to the small sample size, early app evaluations are crucial since a few mediocre or negative reviews might destroy an app before it ever starts the round.

The app has been designed, created, tested, and prototyped. Finally, you are prepared to start the application.

The price scheme for your app, or other ways it may be monetized, should have been decided upon earlier by different departments of your company.

Several of the most popular ways to generate cash include:

A third party called an app marketplace or the app store will often be used in large-scale distribution.

The middleman provides access to the software for customers to buy and download in return for a hosting fee and, sometimes, a share of the selling price. Keep in mind the expenses involved with launching and maintaining your app on an app store: The server often levied a publication cost, a transaction fee for each download, or both.

People often overlook this stage, which is the “lifecycle” component of the “mobile development lifecycle.”

The continuous maintenance of the application after its first release is what transforms mobile development into a lifecycle.

What happens if users encounter an unanticipated problem with the app’s functionality on a particular device? What if you come up with a brand-new feature that would be excellent for your app? Or, perhaps more crucially, how can you keep your app functioning and relevant as mobile device hardware and software change?

If you don’t give these questions serious thought before developing your app, you should do so after it has been released. Otherwise, you risk your app becoming irrelevant since you designed it for a particular moment in time. The maintenance phase should be an ongoing, proactive strategy to guarantee the functionality and health of your software for as long as it is required.

Modern business owners should carefully plan their initiatives, manage the app development process, and maintain the finished product since the app industry is often quite competitive.

Every mistake results in clientele being lost!

Recognize the stages of the app development process in advance and be ready to make errors.

These project execution processes, which include conception (research), design, development, stabilization, deployment, and maintenance, call for expertise, resources, and time.

Start by developing the technical specs and concept documentation for your company ideas.

After that, you might begin creating a budget and monitoring your marketing. Pick an effective monetization plan. Plan and launch your marketing campaign before the scheduled release.

Keep in mind that creating an app takes more than a single day. Practical and valuable software that users can download and use in their life must consider a variety of things. The procedures involved in mobile app development are only the start of your project’s story. Your product must be flexible and often updated to compete in today’s mobile app market.

The mobile development lifecycle requires careful consideration and preparation, but it is not as difficult as it may seem.

CFD Trading – Strategies And Tips You Must Know

How to Reduce Lag While Live-Streaming?

The Origins of Driving Games Over the Years